Real Estate Finance and Investments: Risks and Opportunities, Peter Linneman, PhD and Bruce Kirsch, REFAI / Chapter 11 | Development Feasibility Analysis
Buy the book now
If you are using an edition of the book earlier than Edition 5.2, please reference the “Pre-Edition 5.2 Replacement Pages” below as replacements for pages 180-184 in the printed book.

Developers attempt to determine if a development project makes financial sense by performing financial feasibility analyses.  Simple “back of the envelope” calculations provide an initial indication of whether it makes sense for a developer to take on development risk for a particular site before spending time creating a detailed spreadsheet model.

Listen to this narration if you prefer

The build to calculation (e.g., “build to a 10”) is an expression used by developers to state a threshold for expected income return on a development project.  The chosen threshold is, at a minimum, the yield sufficiently attractive to entice equity and debt sources to finance the project.  A developer that “builds to a 10” expects a 10% stabilized NOI return on expected total costs (Build to 10 = 0.10 = Expected Stabilized NOI / Expected Total Development Costs).  Total development costs consist of land, as well as all hard and soft costs.

Developers often have an estimate of what the cost to build will be on a unit basis (e.g., $350 per square foot (SF)).  Factoring in estimated soft costs, land costs and financing costs per square foot, they can quickly get a rough sense of how much the development will cost per square foot.  From that point, they need to solve for the numerator (NOI per square foot) to see if the project will meet or exceed the targeted yield.

If the yield calculated is lower than the developer’s required return threshold (10%), the development is not feasible.

Developers also analyze the feasibility of a development project by determining the Replacement Rent per Gross Square Foot necessary for a potentially viable project (i.e., what market rents have to be for the project to yield the developer’s required return).  A developer that expects to build to a targeted yield will solve backwards for the replacement rent.  However, since market rents are quoted on a Leasable Square Foot basis, it is necessary to exclude the loss factor and stabilized vacancy from total square feet built.  The figure calculated as the Rent per Leasable SF must be supported by the market for the development to be viable.

A common mistake developers make is simply extrapolating rising rental trends to assess if the market will support expected rents rather than analyzing supply, demand, and development costs.  A good rule of thumb to keep in mind is that once rents rise above replacement rent, developers will develop.  As this new space comes online, rents will revert towards replacement rent, rather than continue on an upward trend.

A developer can also determine the maximum amount to pay for land by making land cost the unknown variable in the “build to” calculation, given a targeted yield for the project.  It is important for developers to consider the Floor Area Ratio (allowable density) of the site when calculating the price they are willing to pay, so as to determine the cost of land per buildable square foot.

These are the types of questions you’ll be able to answer after studying the full chapter.

1. Alexis Development Corp. was recently given the opportunity to bid on an attractive development site in the financial district in downtown Philadelphia.  The executives at Alexis believe there is growing demand for high–end office towers due to the growing demand by pharmaceutical companies in the area.  The investors at Alexis expect to achieve an 11% return on development projects and do not wish to begin developments if such return cannot be achieved.  Doug is the Head of Development at the firm who was given the task of assessing the feasibility of the Alexis Office Tower project.

Below are the cost and income data Doug has collected for the project: 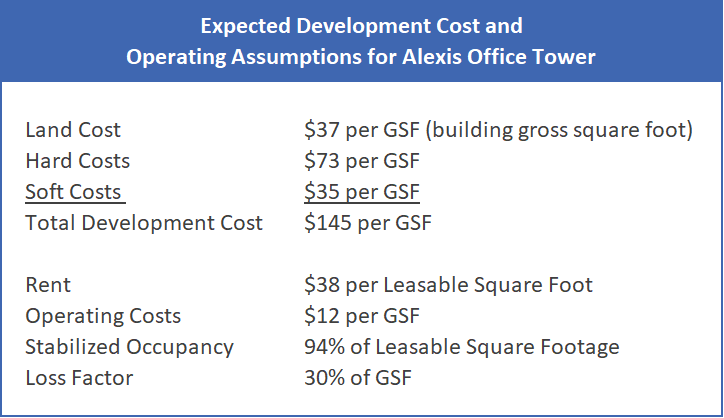 Development risk from the developer’s point of view (9:39)

BRUCE KIRSCH: For those students and practitioners who aspire to be developers at some point, nothing is more interesting and stimulating than this whole notion of being a developer, being the visionary, helping to oversee the design and construction, and then monetizing a new asset where there previously had been nothing or maybe it was one use and they change it to another use.

And so, this is a very, very risky part of the business and as a result, it’s extremely important that before we start pouring money into a hole, literally and figuratively, we need to know if the basic economics of this transaction work. And if they work, are they attractive enough to warrant the perceived risks. And so the biggest risk in my opinion is just the simple passage of time or the time to market for your product.

And in a highly regulated jurisdiction like Washington, DC, for projects of any significant scale, which let’s say a 200,000 square foot office building is a pretty significant project in DC, we’re talking two to four years before your product exists and can be tenanted. So, the world can change a whole lot as we know in that time span, what do you think is the biggest risk related to development, and what are the biggest misconceptions that students might have about development risk?

PETER LINNEMAN: That it’s huge. That’s the biggest misconception is somehow it’s not that risky. I don’t know quite where that came from, it’s clearly not from being in the business. You think about all the risks of operating a building that exists, before you bought it you know its heating systems, you know what energy costs are, what the tendency is, what rents today are. And by the way, that’s still a risk because all those change days to day, week to week, month to month as you move forward, people get sick, your building manager dies, et cetera, et cetera, et cetera.

You take that and the first thing you do with the development is say, let’s try to guess what that’s going to be three years from now. Namely from when I start to when I actually have a building. You don’t even get to guess about those things that we just talked about for three years. So however good your forecasts are about what things are going to be in the next month, to the next week, the next year, they get worse the farther out you go. I don’t know the three years nearly as well as I know the one day. So that’s just the passage of time is an enormous risk.

Second is, what happens in that interim three-year period? Well, not only can markets change, but your conditions, your health, you know your abilities can change enormously over that time period. You could lose key members of your development team who get bid away to go elsewhere.

And so, you spend time and energy, time is your enemy, they’re expensive processes. Then when you even get all your permits and you start building, did they set the concrete right, was the steel right, is the wallboard, as you know Bruce, there was the wallboard problem. Something you, quote, don’t even really think about. You buy your wallboards, you put it up in, the drywall goes in, you put it up, well then it turned out that it was faulty and moldy and now you’ve got to go and take it out. And just all of these things that could go wrong.

And then when you’re done, all you have is a building with all the headaches that normally go with a building. So I’ve always thought of development as three years of not only delayed gratification, it’s reduced. I could have gotten income those three years from an existing building, first of all. Secondly, my best predictive years were taken and I don’t even get to predict what happens to the building, it’s all about creating the building and the political process. So the risk is enormous.

And all you have to do is go through it once and you go, huh, who would have guessed this could have happened. The best comment I ever heard about development was from Al Taubman many, many years ago, I learned a lot of real estate from Al Taubman. And one of his comments was, a great developer is about taking risks out of the process.

You do that by pre-leasing you do that by pre-purchasing some of your materials, you do it by hiring the best designers, the best engineers, the best planners, the best lawyers. We say, well, whoa, those are all expensive. Taking the risk out of the project is expensive but it’s about risk management. Otherwise, nobody can handle that kind of risk. You’ve got to have the best you can possibly afford otherwise you’re just going crazy on it.

And even still by its very nature, it’s a creative process. It’s a process of creation and creation is risky. I mean, there’s no two ways about it. You know, you can either buy a cake or make a cake or buy a souffle that’s you know is succeeded or trying to make a souffle. And the creation process is much riskier than the existing product business.

BRUCE KIRSCH: Right and there are tons of really good books out there about the building of the Empire State Building and so on that I think if people read those they’ll get it.

PETER LINNEMAN: Huge number to the Empire State Building and Rockefeller, I was chairman of Rockefeller Center, I wasn’t when it was built. But you know, tremendous numbers of great icon buildings that people believe were great successes economically, were disasters because they came on at exactly the wrong time. They were started in a boom period, came on in a bust period, and you soldiered on and you overcame. A lot of these great iconic buildings were failures, enormous failures economically. They may have been successes as space but that’s a small consolation to the guy who’s bankrupt.

BRUCE KIRSCH: Unfortunately, in every cycle, by the end of the cycle there are a lot of developers with a lot of AIA chapter awards but no more companies.

BRUCE KIRSCH: And as you said, it’s small consolation. So it’s a very, very, very tough business. I think anybody who’s been involved in the manufacture, marketing, and distribution of any physical product has some level of appreciation for it.

BRUCE KIRSCH: Right. I mean, just something as simple as quality control. Let’s say you’re doing a 300 unit apartment building, well, you can’t have it that some of the units have really nice execution on the finishes and others look like crap.

PETER LINNEMAN: Right. I mean, it’s got to be consistent. All of these are just huge challenges and they don’t sound like big challenges until you’re the one dealing with them. And then they’re huge challenges.

Analysis and evaluation of a proposed project to determine if it is technically feasible, feasible within the estimated cost, and will be profitable.

How much gross square footage of the building is unleasable.

The build to return, expressed as a percentage of total development costs.

The process of valuing land with development potential where the land value is equal to the net of total completed project value, total development costs and total required profit.

The ratio of a building’s above-grade gross floor area (both vertically and horizontally) to the area of the lot upon which the building is constructed.

The process of reducing construction cost where possible without destroying the value of the final product.

A reserve set aside for unknown but expected project cost overruns.

How much is being spent daily (or weekly, or monthly) during development; typically, the run rate is low in the beginning, rising as construction gets into full swing, and then stabilizing upon completion at your interest-carry cost.